close
FREE SHIPPING ON ORDERS OF $35 OR MORE! (U.S. only)
We aren’t going to be with our extended families on Christmas this year, so I want to make a yummy breakfast for our family since we will be missing out on some of the traditional stuff.  This recipe is definitely a contender!
It is super simple to make, as it uses the store-bought cinnamon rolls and frosting.  It definitely would not take long to throw together Christmas morning.  I love the nuts on it, but feel free to leave them out if you so desire…I’m sure it would be equally as delicious 🙂  My 5 year old gave his approval and had 2 servings of this (something he NEVER does).  Enjoy! 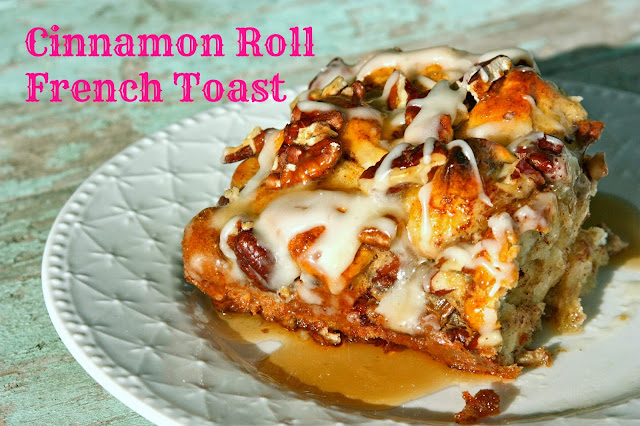 Cinnamon Roll French Toast
2 packages of cinnamon rolls
1/4 lb. butter
5 eggs
1/2 cup heavy whipping cream
2 teaspoons vanilla
2 teaspoons cinnamon
3/4 cup maple syrup
1 cup chopped pecans
Melt butter and spread in a 9 x 13 pan.
Separate the cinnamon rolls and cut each roll into 8 pieces.  Spread in pan.  Save the icing to use later.
Beat eggs together completely in bowl.  Then add the cream, vanilla, and cinnamon to the eggs and mix thoroughly.  Pour over the cinnamon roll pieces.
Drizzle syrup all over and Sprinkle chopped pecans on top.  (I just put pecans on half of mine)
Bake at 375 degrees for about 22-28 minutes or until golden brown.  Let cool for about 15 minutes.
Take the metal cover off the icing and stick it in the microwave for about 15 seconds or until it is thin enough to drizzle.  Drizzle icing all over the top of the baked cinnamon rolls.
Serve with syrup if desired. 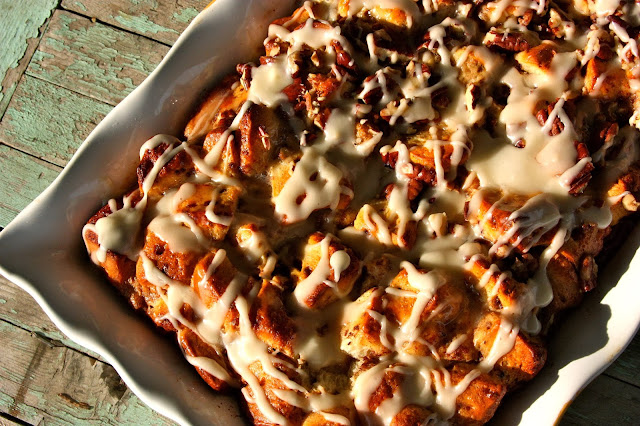 Recipe Source:  My Life According to Pinterest
britni
http://myrecipeboxx.blogspot.com/