Buenos Dias!  As we are approaching Cinco de Mayo, I’d like to share just a few more recipes with some Mexican flare.  What is your favorite Mexican meal? 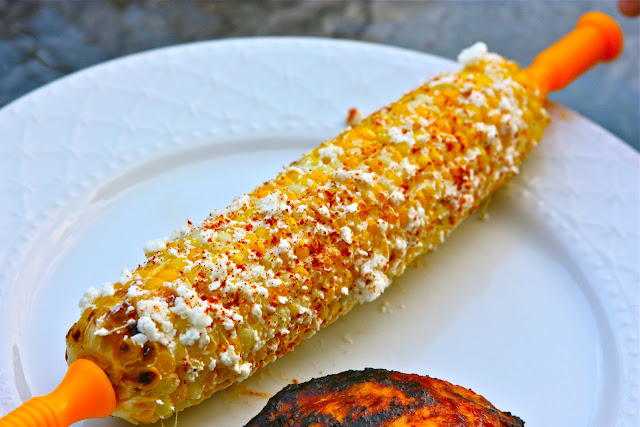 Oh Nacho Libre…such a quotable show!  It was on tv the other day and I saw them eating the mexican style corn, and remembered a recipe I had saved called “Nacho Libre Corn on the Cob.”  After trying this Elote recipe, I knew I’d found a winner.  This one is a little simpler, and I can never turn down feta cheese!  I’m sure cotija cheese would be wonderful, but feta was already in the refrigerator.


Nacho Libre Corn on the Cob

Husk your corn and wrap in tinfoil.  Grill the corn until all sides get a little brown.

Brush the corn generously with a half mayo half sour cream mixture.

Roll in cotija cheese – kind of a mexican feta, you can sub for feta if you want.

Season with chili powder, then squeeze fresh lime juice over the top. 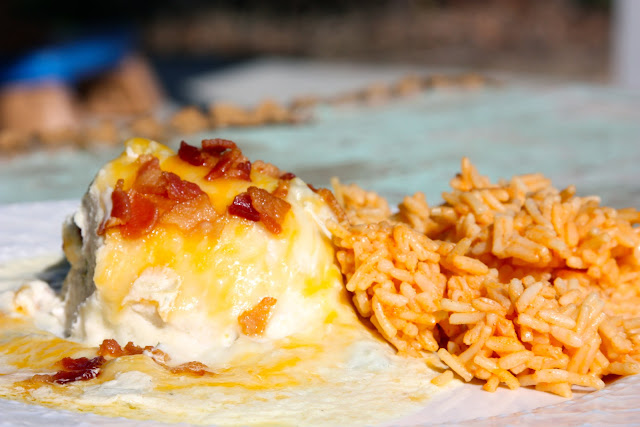 This dish has plenty of spice with jalapenos as well as green chiles.  May be a little much for smaller kiddos 🙂  Bacon was a perfect compliment to everything.  Enjoy!

Carefully slice chicken in half to make a pocket so you can stuff it. Don’t cut all the way through. You just want to make a good sliced flap for stuffing.

Cover 9×13 with foil and bake at 350 degrees F for about 50 minutes or until cooked through.

While chicken is cooking, make sauce. To make sauce melt butter in a large sauce pan. Once melted add flour and stir for a minute or two to make a roux. Once roux has been made, add half and half slowly, stirring constantly, until all has been added and sauce thickens to desired consistency. Remove from heat and add garlic salt, onion powder and green chiles. Set aside until chicken has been cooked through.

After chicken has cooked for 50 minutes and is cooked through, remove foil. Cover chicken with sauce. Sprinkle evenly with cheese and bacon and place back in oven and cook additional 5 minutes or until cheese is melted.