It seemed like a good idea at the time, to turn my 7 year old loose with a butcher knife.

I’d been to Gilcrease Orchard earlier today and brought home three pumpkins.  Sounds like a simple thing, doesn’t it?  To carve three pumpkins with three children?

Maybe if my 5th grader hadn’t had three hours of homework.  One assignment was to make a bar graph on the computer to display data she’d collected for a science experiment.  (You can whip that out, right Mom?)  Oh yeah, daughter, I make bar graphs in Excel all the time.  So while I’m nursing a break dancing baby and trying to watch Youtube tutorials on how to label the axes on the bar graph, the kids continue to beg to start on those pumpkins. They take them in the backyard to “show to their friends”.  I hear the neighbor boy, who is hanging over the cinder block wall screaming and my kids laughing.  Whaaat is happening back there?

Jemma, my five year old, has dropped her pumpkin from an undisclosed height, splitting it.  And Evan has gone all Norman Bates with a butcher knife on his pumpkin, leaving it fit for a crime scene, not my front porch.  Did I actually tell him to go ahead and carve his pumpkin??  Am I psycho?

The concessions I make between the hours of 3pm and 7pm are sometimes baffling.

Like, if I survive those hours with a meal prepared, homework done and my voice not raising above she-witch decibels, I feel like I need a fat medal.  And a sticker to put on my van.  Something along the lines of “My kids are fed and educated every night between the hours of 3 and 7”.  Ragnar stickers?  Marathon stickers?  Mama, please.  Feed and educate four kids between the hours of 3 and 7.  That’s a true test of endurance. 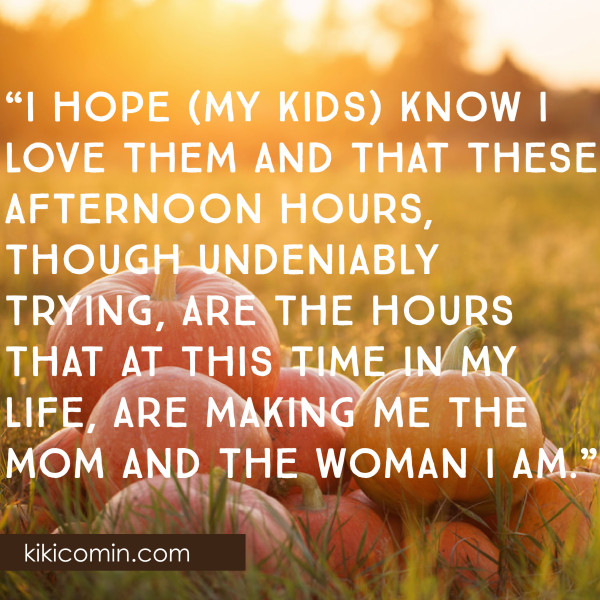 I told Jemma to put a show on for the crying baby so I could get dinner going.  (A new recipe of course, on a night when my husband was gone and pumpkins are dying and science experiments are barking orders at me.) I’m just asking for punishment, sometimes.

In the fringe of my consciousness, I think I hear The Hunchback of Notre Dame on.  Something whispers to me, “Isn’t that a super creepy Disney show?”  Like so creepy it’s the only Disney movie that never made it to DVD?  Like all the imagineers later said, “Yeah.  Never mind.  Our bad.”  My whispering suspicion was confirmed when I see Jemma holding up her Elmo plush toy to Luke and making Elmo sing, “FIRE! HELL FIRE!” In a creepy five year- old girl Elmo voice. (Smack my forehead.)

Truth:  It’s a lawless zoo up in here. It’s not that I don’t try.  My kids are good and they follow rules.  It’s just the laws of nature I have no control over.  And four tired, hungry, hyper kids between the hours of 3 and 7 follow the laws of nature, which closely resemble chaos theory.  It’s like popping a bag of microwave popcorn and asking the kernels to please pop one second apart and line up by size and saltiness.  Nope.  They pop how they pop.  They eat stuff off of the floor, and they violate pumpkins and they fight and cry and sing in creepy Elmo Satan voices to sad babies.  Freaking chaos.

After things simmered down a bit, I fed them warped Ikea bowls of new recipe food, finished up the last 17 problems of algebra and duct taped a pumpkin back together.  No, I won’t be instagramming this year’s jack-o-lanterns.  Especially since they are still all stringy inside and are barfing seeds out their noses.

But I hope my kids had fun.  I hope they remember the jokes we told while we tried to carve the hardest pumpkin I’ve ever seen.  I was grunting and sweating and Evan kept telling me to imagine the lines super long at Walmart…that should give me the wrath necessary to cut through that impenetrable pumpkin skin!  I hope Afton goes to school proud of her science bar graph.  I hope they know I love them and these afternoon hours, though undeniably trying, are the hours that at this time in my life, are making me the mom and the woman I am.  And I hope baby Luke doesn’t dream of devil Elmo tonight.

I am excited to be partnering with JOANN's today on this post. In all the years that we have celebrated Halloween in our home, we have never had a witch! Today I want to show...

END_OF_DOCUMENT_TOKEN_TO_BE_REPLACED

Hi, Hi, Hi! I have been missing around here lately. First, be sure to keep up with me over on Instagram...I keep you updated on all things Kiki and Company over there and will...

END_OF_DOCUMENT_TOKEN_TO_BE_REPLACED

This post is sponsored by Cricut, but as always, all opinions and text are 100% mine.   These happy Halloween Party Cups are quick to put together with your Cricut Explore Air 2, vinyl and Chinet...

END_OF_DOCUMENT_TOKEN_TO_BE_REPLACED

Halloween Out of Candy Free Printable

I LOVE Halloween.There I said it. ;) With 5 kiddos, I adore everything about the non-scary part of Halloween. One of our favorite traditions is to go trick or treating and then to sit...

END_OF_DOCUMENT_TOKEN_TO_BE_REPLACED

I am super excited to be back over at Eighteen25 today for Spooktacular September..a whole month of a whole lot of Halloween projects. The project (and printables) I'm sharing today are these sweet Free...

END_OF_DOCUMENT_TOKEN_TO_BE_REPLACED

Mother's Day is on Sunday and I wanted to be sure to get one more new Mother's Day print up in time for you to share with your mom. I adore this print SO much....

END_OF_DOCUMENT_TOKEN_TO_BE_REPLACED

I am so grateful Mother's Day is around the corner. Here is a simple Mother's Day card sure to bring a smile to any momma's face! To make this card is super simple: Download the free...

END_OF_DOCUMENT_TOKEN_TO_BE_REPLACED

10 Easy and Free Ways to Say Love with Your Time

I blame all of this on Netflix and The Wonder Years. At night, I’ve been binge watching my childhood favorite. If you haven’t seen it, shame, shame, shame.  It’s about Kevin Arnold, a junior...

END_OF_DOCUMENT_TOKEN_TO_BE_REPLACED

Fanfare to the Common Mom- YOU ARE ENOUGH!

-For my friend who wondered if she was enough.   Fanfare to the Common Mom   You lent your body to grow another. You are the kisser of wrinkled, newborn lips. Pillow fluffer, brow - temp - tester, nail clipper,...

END_OF_DOCUMENT_TOKEN_TO_BE_REPLACED

I'm excited to be over at Bombshell Bling this morning sharing a fun (and very useful) Out of Candy Sign for Halloween. I'll see you over there!

END_OF_DOCUMENT_TOKEN_TO_BE_REPLACED

Halloween is sneaking up and one of my favorite things to do is to put these Lunchbox notes in my kids lunches. This Halloween Ghost set will be just the thing to make them...